In my last post, I mentioned how eating out in Venice is anything but obvious. That’s why, for the last night of our vacation, we wanted to make sure that we wouldn’t be disappointed with greasy frozen pizzas or an overpriced “menu turistico.” After doing some research, we read about the Riviera restaurant that was supposedly one of the best restaurants in Venice right on the beautiful Giudecca canal.

We called on Saturday morning to make a reservation for that night, but the only time available was 9:45. Since living in Europe I’ve gotten used to later dinners, but even so that was a bit later than we’d hoped for. We decided to still go for it, though, and I’m SO glad we did!

It was about a 30 minute walk to get to the Riviera all the way in the southern bit of Venice, but strolling Venice on a summer night is definitely nothing to complain about! Our table wasn’t quite ready when we arrived, but the amazing staff quickly brought us two glasses of Prosecco to sip on while we waited next to the canal. Again, who could complain?

After a very brief wait were seated at a cozy table facing the water. The incredible server, who spoke both French and English, explained the menu just enough without being overbearing. He really knew the menu and gave wonderful, well-informed recommendations. He even brought out a tray to show us the fresh (caught that day) fish for the plat du jour. I was naturally horrified by this, but I imagine that someone who enjoys seafood would have been really delighted!

The Riviera menu is far from boring. No spaghetti bolognese to be found here…every dish seems to have been carefully thought out and each recipe carefully crafted to give diners a unique experience. Restaurants in Venice tend to be pretty heavy on seafood, surprise surprise. While that may be a dream for some, it severely limits my options. In this case, though, it made it a little bit easier to decide between so many delicious-sounding options!

For the first course, I had a caprese salad…but not just any caprese salad. This one had buffalo mozzarella and stracciatella with cherry tomatoes and a light basil pesto. I’ve become a bit of a caprese salad snob after a trip to Terracina last summer, but I can safely say that this was the best caprese salad I’ve ever had. 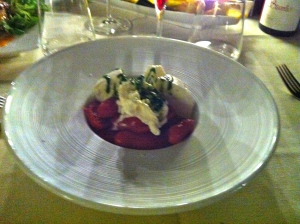 The starters were served with a basket of different homemade breads and breadsticks, all of which were delicious. The waiter told us that at the Riviera, everything is homemade–even the pasta.

A went for an appetizer of seared scallops with mushroom and pumpkin. Sorry about the quality of the photos–this wasn’t really the kind of place to pull out the flash…

For the main course, I had mint pappardelle with veal sauce and pesto. This was nothing like any pasta dish I’ve ever had, and I’m not seeing it on the menu anymore…but there’s a similar dish with thyme pasta and duck sauce which sounds equally amazing. 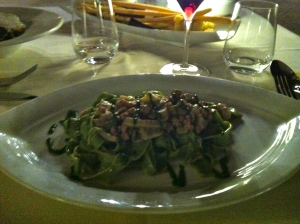 A was a bit more adventurous and went for a squid ink gnocchi, which he really liked. He said the squid ink wasn’t too strong, but I was still a little too scared to try! The portion sizes were perfect, enough to appreciate the flavors and to feel satisfied but not too much to make us too uncomfortable stuffed afterwards.

Choosing a dessert was the hardest part of the meal…everything sounded delicious. We were tempted to try something out of the ordinary, but finally we both decided that we couldn’t leave without tasting Riviera’s tiramisu. One of the best Italian desserts prepared at one of the best Italian restaurants? Of course it was amazing! 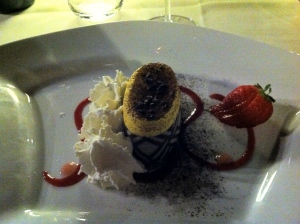 As I mentioned in my last post, eating well in Venice means being prepared to drop some cash. There aren’t any prices on Riviera’s menu, and the server was very discreet in giving the check to A so I have no idea how much this actually cost. However, I’d rather spend more at a place like this with perfect service, a beautiful waterfront setting, and delicious and innovative food than pay for overpriced pasta carbonara that’s swimming in oil, wouldn’t you?

Since moving to France (and being surrounded by baguettes!), I've tried to find a balance between healthy eating and discovering French gastronomy. With this blog, I hope to share some easy, healthy recipes as well as my more indulgent culinary experiences. Bon appétit!